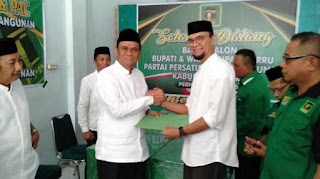 The fight in the Barru 2020 elections will certainly be held tight.

Both are incumbent Barru Regent, Suardi Saleh and Malkan Amin.

Evidence of seriousness by the two prospective candidates to advance in the 2020 Barru regional election contest, has been shown.

Even in the initial stages of capturing the regents, both of them have begun to compete for support from political parties (Barpol) at the Barru district level, to be driven in the elections.

Evidently, both registered or returned the forms of prospective regents in four political parties at once on the same day, Wednesday (10/30/2019) afternoon.

The four political parties that were occupied registered at the closing seconds of the registration, namely PPP, PKB, PKS and Gerindra.

But of the two, Malkan Amin first returned the forms to the four political parties, then followed Suardi Saleh.

Suardi Saleh and Malkan Amin, each accompanied by a team and an investigator when registering.

"If my personal problem is resolved. Honestly there is no other purpose, I see that Barru needs the support of leaders who have enough time, knowledge and ability to develop the welfare of the Barru community," Malkan Amin said when returning the form to the political party.

Meanwhile, Suardi Saleh clearly stated, his return returned the form to the political parties as proof of his seriousness to go forward in the 2020 Barru Regional Election.

Suardi hopes that the political parties occupied register can fully support and be brought up in the five-year political contestation.

"Our visit to the political party to register is certainly a form of our seriousness to participate in the elections. And our hope is that political parties can support this political contestation," he added.

In addition to Petahana Suardi Saleh and Malkan Amin, a number of other candidates also expressed their readiness to compete in the 2020 Barru Election.

It was based on the results of a discussion meeting with the Barru regional government, and was signed in the Regional Grant Agreement (NPHD) Text

According to Masdar, the budget previously proposed by the KPU was approximately 28 billion

But after rationalization through the discussion meeting, 20.7 billion was determined.

"Each of the KPU divisions rationalized their budget before budgeting. And until the final results of the discussion, the meeting point was in the framework," he said.

KPU Chair Barru Syarifuddin Ukkas added, the Rp 20 billion budget had covered all KPU needs in the 2020 elections, except for the cost of adhok.

"Adhok costs are not included there. Because there are additional costs (salaries) for that. As the results of the Ministry of Finance's decision," he explained.

However, the Barru KPU has also coordinated with the Barru local government regarding the additional budget.

"We have written, and the Regional Government of Barru also stated that they are ready to budget. But for that matter, the next time we discuss it again," he said.

Mudassir returns the Cabup-Cawabup form on the same day when taking the form.

Mudassir said the return of this form was a form of his seriousness in participating in the Barru elections.

"Registering at PKB is the right decision. PKB has quite a good management of political organizations," Mudassir said.

"They have five seats in the DPR. So for those of us who want to go forward, of course we need acceleration like PKB did," he added.

After registering at PKB, the son of Barru Regional Secretary also took the form at PPP.

Until the fifth day of registration, 12 balloons had already taken forms at PKB.

But of all the prospective candidates, only Mudassir Gani returned the form