40 Thousands of Participants Will Enliven the PGRI Porseni in Barru 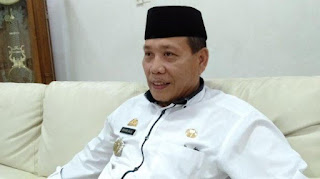 Barru PGRI Secretary, Irham Jalil
The Republic of Indonesia Teachers Association (PGRI) Barru continues to boost preparations ahead of the PGRI Provincial Sports and Arts Week (Porseni) event.
South Sulawesi PGRI Porseni will be held in Barru Regency, from 21-25 November 2019.
Barru PGRI Secretary, Irham Jalil said, approximately 40 thousand PGRI Porseni participants would be present in Barru District
Participants came from 24 districts and cities in South Sulawesi.
"We declare Barru is ready. Ready to succeed as a host and successful implementation of the 2019 South Sulawesi PGRI Porseni," Irham Jalil told hsaidbenmar.blogspot.com, Friday (11/01/2019).
According to Irham Jalil, preparations for the South Sulawesi PGRI Porseni in Barru have now reached 80 percent.
Among them, residential facilities for participants of each regional contingent, and the place of implementation of the Porseni.
"Our preparation of the remaining 20 percent is actually for the implementation of this Porseni. Including for accommodation for Barru athletes, the committee has also been prepared," he said.
Irham continued, the residential or lodging prepared for the participants approximately 800 houses
Housing is located in three districts, namely Barru, Balusu and Tanete Rilau.
While the location of Porseni, is centered in the city of Barru.
"For housing we use residents' homes and locations for sports competitions and art activities, all carried out in the city of Barru," he explained
The donation funds collected later are for the preparation of the contingent and the implementation of its activities," he said.
"Our step forward is after the socialization. We want to meet Forkopimda elements such as the attorney general's office and the police station to discuss this matter. At the same time as a form of transparency and will be accounted for later," he said.
The Head of Kesru Barru added, several sports items to be contested, including volleyball, badminton, takraw, tennis and table tennis.
As for art, there are calligraphy, MTQ, solo singing to teacher creativity competitions.
"God willing, Governor Nurdin Abdullah will open the event immediately," he added.
PGRI Barru has issued an official report regarding the implementation of the PGRI Porseni, which is centered in Barru Regency.
In the minutes it was written, members of PGRI Barru, starting from kindergarten-level teachers, to senior high schools were required to contribute money to help with the cost of implementing the PGRI Porseni.
The amount of donation varies, for kindergarten, elementary / MI, junior high / senior high school, senior high school / vocational / vocational school supervisors, the donation fee is one million rupiah.
For ASN teachers who are certified are Rp. 750 thousand and ASN teachers who are not certified are Rp. 550 thousand.
However, some teachers at Barru complained about the donation.
That's because the number charged is considered very high.
Barru PGRI Secretary, Irham Jalil gave an explanation related to the contribution of the Porseni.
He said, the numberor nominal contribution determined by PGRI Barru had become a joint agreement.
Which was decided through a socialization activity in the auditorium of the Barru education office, Friday (7/7/2019).
"The results of the decision related to the donation have been shared, both teachers, school principals and the head of the PGRI branch at the time of the socialization," Irham Jalil told TribunBarru.com.
The allotment of donations will later be used for the entire cost of the implementation of the PGRI Porseni which will be held next November in Barru.
Not only that, donations will also be used for PGRI Barru contingents who competed during Porseni.
"The costs borne for the contingent are operational, such as training costs, food, costumes," he said.
In fact, according to the Chairman of the Barru PCNU, PGRI Barru will prepare allowances for the contingents.
However, the amount of allowance given has not been determined.
Because PGRI Barru will condition the funds used during the implementation of the PGRI Porseni later.
"What is certain is that we will also prepare the contingent's pocket. But the figure cannot be determined yet, because it is conditioned with existing funds," he said.

Then, Irham Jalil stated that the donations set by PGRI Barru were actually not high and neither burdensome

Because, from the donated money put in, Rp 250 thousand of them will be used by the teacher and the school principal himself.

"Rp. 250,000 will return to those who donate. We have costumes that are distributed at that price," he said.

It is not difficult according to Irham Jalil, because PGRI Barru does not ask teachers to pay donations simultaneously.

However, the contribution can be paid in installments until the figures specified in the category are sufficient.

"So the payment does not have to be all direct. It can be paid in installments," he added.

Irham Jalil also explained that the fees charged to the teachers were nothing but to succeed and enliven the PGRI Porseni event which was centered at Barru.

"Obviously Barru who was appointed as the host of the South Sulawesi PGRI Porseni, we want to be lively and run successfully by achieving training. So teachers and principals are asked to help in meeting the needs of this activity," he added.

Irham Jalil did not dismiss if the Barru Regency Government already had a budget for the implementation of the PGRI Porseni in Barru.

It was stated, the budget from the Barru Regency Government was prepared at Rp 1.4 billion.

However, Irham Jalil said the budget was only intended for the preparation of the PGRI Porseni in Barru as the executive committee
By Hsaid Benmar at November 01, 2019