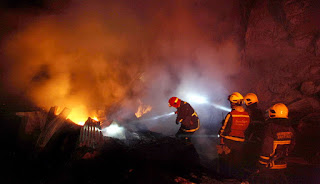 The house fire on Jalan Kampung Makasar, RT 009 RW 02, Makasar Village, Makasar District, East Jakarta, was allegedly caused by a leak of gas cylinders. As a result of the fire, a resident suffered burns.

Head of the Operational Section of the East Jakarta Fire and Rescue Service Sub-Section, Gatot Sulaiman, said that he received a fire report on Monday (12/08/2019) morning, at around 06.37 WIB. Receiving the report, as many as 11 fire trucks were deployed to the location.

He said, his party had difficulty putting out the fire that burned the house belonging to the citizen named Sugito. That is because access to the location is narrow because many cars are parked carelessly around the location.

At present, his party has succeeded in putting out the fire that burned the residents' houses.

"The blackout is over. Narrow access barriers. Many cars park carelessly," said Gatot.

Meanwhile, due to the fire, the victim suffered a loss of approximately Rp 350 million. A resident of Suyud (53) suffered minor burns due to the fire.
By HSaid Benmar at August 11, 2019