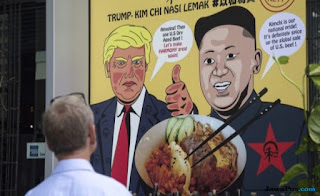 US President Donald Trump and North Korea's Supreme Leader have just held a bilateral meeting. After that, the two immediately make lunch together.

The menus eaten by both blend the flavors of east and west. One of them is beef ribs and sweet sour pork.

For starters, both will eat shrimp cocktail and avocado salad. Salad dishes include green mango salad typical of Southeast Asia with lime honey sauce and fresh octopus and Korean oiseon is a plate of cucumber.

For dessert, Trump and Kim along with their delegates will eat chocolate tartlet ganache, Haagen Daaz vanilla ice cream with cherries and tropezienne, cream-filled cake.

After this, in the afternoon, Trump is scheduled to hold a press conference to the media crew. Then, at night, Trump will soon return to the White House.

US President Donald Trump and North Korean Leader Kim Jong Un meet face-to-face at the Capella Hotel. Both shook hands for the first time in the media. The historic handshake takes about 10 seconds. Smiles graced the faces of the two leaders of the country.

This article has been published on Kompas.com under the title "Historic 10-Hands Handship between Trump and Kim Jong Un".
By Hsaid Benmar at June 11, 2018