A REAL STORY: Lailatul Qadar Down in this Region, Residents Ran Awareness of Burned Mosque 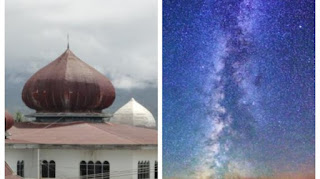 It was Anre Gurutta Haji (AGH) Ambo Dalle midnight at Mangkoso Mosque, right on the 27th night of Ramadan.

Suddenly a splash of bright light ran down from the sky.

The light shimmered in the darkness of the night, knowing that Mangkoso had not been electrified yet, entered the mosque by the roof.

AGH Ambo Dalle is perched, sitting cross-legged in the middle of the mosque room, suddenly surrounded by seven light blobs. The mosque was brightly lit.

A number of residents who witnessed the event ran to the mosque for thinking the mosque was on fire.

When the villager arrived, the light slowly drifted toward AGH Ambo Dalle's residence, about 50 meters from the mosque.

"The extraordinary spiritual event was marked by a beam of light that filled every corner of the mosque. The mangkoso community who happened to be awake that night thought that the mosque was on fire. Gurutta Abdul Rahman Ambo Dalle wishes to be given a science of blessing and his seven generations to become a great scholar of Ahlussunnah Wal Jamaah, "explained the builder of Pondok Pesantren DDI Mangkoso, Ahmad Rasyid Amberi Said several years ago. 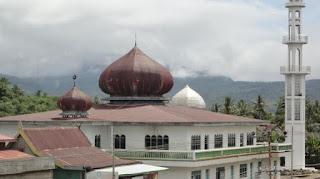 To commemorate the event, four tiles in the center of the Jami 'Addariah Mosque were stuck without a mixture of cement.

"This is where Gurutta sits when he visits Lailatul Qadar," said one of the worshipers one day.

Some residents of Mangkoso, who lived in those days, say, a few days of water wells at AGH Ambo Dalle's house tasted sweet and delicious water after the event.

AGH Ambo Dalle moved to Mangkoso from Sengkang to develop a study in Soppeng Riaja at the request of many times Datu Soppeng Riaja, Andi Yusuf Dagong Petta Soppeng.

Since then Mangkoso has been known as the "pangngaji" city.

Nicknamed a quiet place, the inhabitants live in peace.

Let not robbers or pickpockets, the slightest thief never existed.
In fact, if any of the people commit adultery, Gurutta immediately notified.

He then told the community that the person was expelled from the village.

Gurutta requested that the old traditions of society contrary to the teachings of Islam, such as glorifying the stones of graves and large trees immediately stopped.

Gurutta even ordered that the tombstones that had been dismantled into the foundation of the road to be trodden by the community to show that the stones have no kekeramatan anything.

During the reign of Whitewater Cowa, he maintained the tradition.

But before breathing his last breath, Petta Coa ordered that the practice containing the element of khurafat was immediately stopped.

4 Signs of Lailatul Qadar Are Down

Lailatul qadar the most special night of 'sought-after' on the odd nights of the last 10 Ramadan.

Already know the signs if lailatul qadar down? read the following.

First of all, if it is derived from its name, Lailatul Qadar, derived from Arabic which means night of decree.

Why is that? because on that night, the Qur'an was revealed as a guide for human life and whoever worshiped the reward will be doubled more than 29,500 doubles.

About the signs, the scholars are different opinions, about when the occurrence of Lailatul Qadar.

But a stronger opinion is on the odd nights in the last 10 days of Ramadan.

The most famous, the opinion about Lailatul Qadar occurs on the 27th night of Ramadan.

However, the difference in the initial determination of 1 Ramadan makes us unable to make that opinion a definite benchmark.

From Ibn Umar, "Rasulullah SAW has said," whoever wishes to meet the night of qadar, let him seek it on the night of twenty-seven. "(Ahmad with a valid sanad)

"Rasulullah SAW is very earnest in the last 10 days of the month of Ramadan, surpassing his sincerity at other times." (Muslim)

If we feel the four things below, then most likely Lailatul Qadar we have met. The four signs are:

1. The air and the mood of the morning seemed peaceful and calm.

3. The night is bright, not cold, cloudless, not hot, and no storms.

4. Who worshiped tonight, getting a different impression from the other nights.

From Aisha. He said, "I am asking, O Messenger of Allah, what if I can know the night of the qadar, what should we say that night?" He replied, "Speak unto you: O God, verily thou forgive, forgive the iniquity, . "(Five Hadith scholars except Abu Dawud, and Tirmidhi considered saheeh)

It is said, although the existence of Laitatul Qadar is very mysterious but there are real and not much try to be reached by Muslims who are undergoing Ramadan.

And if you know, the value of one day is the same as a thousand months until its blessing, it is very disturbing to be approached, grabbed and held because it is a very extraordinary night!

Moreover, one special phenomenon that can not be seen clearly, but it can be felt its presence is, the arrival of the very many angels who flocked down to earth with two-thirds of the universe to meet the sky feels crowded, how can they come at the same time into this world?

Even the Hadith of the Thayalitical History in Musnadnya no. 2545 is also Ahmad II / 592 and Ibn Khuzaimimah in his sahihnya II / 223 mentions: "Lailatul qadar it on the night27 or 29, it is the angel who descended at that time to the earth more than the number of pebbles."

Described in Sura Al-Qadr [97] verse 4: "On that night descend the angels and the Angel Gabriel with the permission of his Lord to arrange all matters."

Why do many angels come down when the qadar lailatul comes? Ibn Kathir in his commentary says, the number of angels who descended at that time, because of the many barakah of the night of this ilaha lailatul qadar.

They descend along with the descent of the barakah and the grace of God, as they are present at times such as when the Qur'an is recited, they surround the dhikr assemblies, and even at that time it is pointed that the wings of the angels are laid on the claimant with all his heart doing his duty.

This is because it is a tribute to them.

What about the signs of the qadar lailatul which is often echoed by the music group "Bimbo", like a gentle breeze or even stop blowing, wildlife does not ring and the mountains hold their breath, it is only as symbolic meaning alone, where silence, kesyahduan or there the sense of surrender slipping, a heart that feels comfortable, longing to struggle with this Creator of Nature.

The existence of this angel is not just a rumor, because it is written from Anas ra who said, Rasulullah said:

"On the night of the lailatul qadar, the angel Gabriel as, turtun the world with a host of other angels, then pray for mercy to dhikr to Allah .." (HR Baihaqi Syu'abul Iman).

According to this hadith, there is a conversation between angels and God asking what should be given to the people who have perfected their work.

The work in question is certainly their hard work in reviving the blessed ramadhan with all kinds of deeds that have been led by His Prophet, earnestly and full of sincerity and expect only the pleasure of Allah alone.

Then, what about the fate of believers who are not enthusiastic about the presence of this qadar lailatul? Of losses are incomparable, because Allah will give rewards in the form of a full reward for people who do not just do worship ramadan this.

As a routine activity that always repeats every year, but strives to improve, introspection with what it does for a full year, by raising worship,

multiply alms and minimize the ugliness that is always done throughout the year, bermunajad apologize to God for the sins he committed.

Then look for the existence of lailatul qadar and his angels at night nan syahdu.

And perfect the obligation of fasting then rushed to pray idhul fitri in the field. Where believers raise a voice to pray.

So God is pleased with the oath to grant the prayers of his chosen people.

And God is willing to remove the sins and replace the ugliness of His people with kindness.
Two whispers

Imam Al-Ghazali states that if the presence of angels approaching human beings is illustrated by Shaykh Muhammad Abduh as follows, each person feels in him two whispers, namely good and bad whispers.

And it is quite possible that there is often a conflict between the two.

Until often the two whispers that even pity people to accept or refuse or bahakan prevent until the 'trial' that decided something.

Then, who is responsible for whispering goodness? Of course the angel is his duty and the whisper of evil is none other than the angel, so that humans fall into sin.

And what exactly are the tasks of the angels on the night of the lailatul qadar? Of meeting the people who are ready to be born inward to welcome this Ramadan not with things that are chaotic or careless, but prepare with the best.

Until those who are very ready to welcome this ilaha lailatul in his soul will always be peaceful, safe and comfortable because it is always accompanied by angels throughout the day to encourage him to do good and good in his body.

His soul felt great peace until dawn! The happy people who accept the presence of angels throughout the night and feel the peace of peace and prosperity until dawn!

His chosen people who get lailatul qadar and accompanied by angels who buzz and glorify call His Asma will look like a new person with a soul that washed away the infinite Divine delights.

The recipients of the qadar lailatul is seen not to stop doing the good in the short term, because basically it will inspire many people to do other positive things.

He will be the pioneer who will share this life until later in the day.

Evidently, if the angels down to earth when lailatul qadar is not a figment.
By Hsaid Benmar at June 02, 2018